That evening I was listening, like many times it used to happen on Saturday at dinner time, at Radio Milano International, in particular the famous Disco Party, a mixed program. In those years began to spread a new variety of music called House. I do not remember the other pieces, but in a mix I listened for sure the famous “Your Love” and it was certainly an opening. Somewhere I still have the tape. I do not remember the year, it could be 87 or 88, a beautiful piece for me. 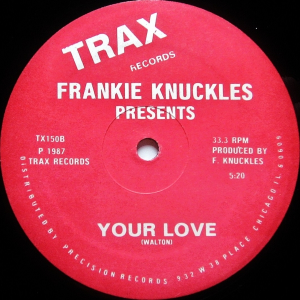 At that time I did not know much about this new musical phenomenon that would have changed the way of making music, but it was something that excited me.
The rhythm and melodies were different from dance and pop, or rock or disco music, which I had until then heard. They were engaging, but so repetitive, that by most, were labeled as disposable music. I remember I was carrying my cassettes when I was dancing with my friends but they did not understand this music, accustomed as they were to the commercial dance, that almost all the radio used to proposed at the time (but still today I would say) and after a while I was forced to remove it. Instead, after more than 27 years, the House phenomenon changed the music and not just the dance one.
The House and its success in the music world at the time, were made possible thanks to pioneers like Frankie Knuckles.
The intuition of Frankie Knuckles, as well as other DJs who started making music in those years in the United States, including New York and Chicago, were crucial to the success of a style that certainly was at first intended for the hottest clubs of the time in those cities, but which later spread in an uncontrolled manner anywhere in the world. And the nice thing about today is that wherever you go in the world you find yourself dancing the same pieces, the same music, whether you’re in New York, Ibiza, Milan or Sydney. 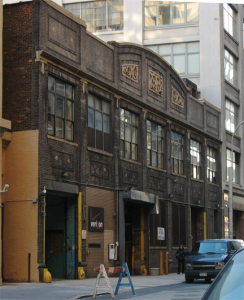 In March 1977, Frankie Knuckles, left the Paradise Garage in New York, where he worked with his friend Larry Levan (†, 08/12/1992), who proposed him to the owners, became the resident DJ of a club destined to go down in history as: the Warehouse. 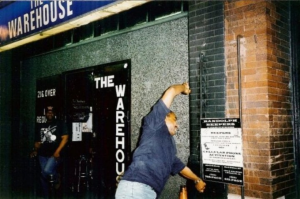 Here he is facing a different audience from the one in New York and Knuckles focuses on electronic experiments for tainting its performance and the music that had until then characterized his selections. He manipulates the record and, with only the help of an old reel to reel recorder, builds a house of re-editing of the soul most beloved songs of the moment, simply isolating the break and assembling them in endless rhythmic and repeated sequences. Those who today call the rhythmic loops. The music with which he grew up, black music, is reinterpreted by him. Retrieve parts jazz, soul, funk, disco, gospel and old but also with the introduction of electronic beats made with synthesizers blends the past and the future.
It is born “cassa” in on every fourth beat of the rhythm section typical of the backing track, still used today. 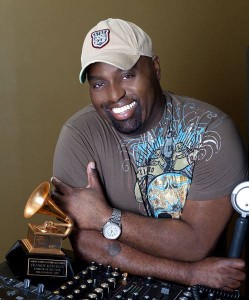 Knuckles uses his experience matured into a legendary club in New York years earlier, the Gallery, located in Soho, Manhattan, in which he shared the console with two other DJ: Nicky Siano and Larry Levan, to introduce these experiments in what we today would call his dj- Set.
He connects the recorder to the mixer and mixing the songs that went with the beat he had created, obtained a completely new sound, tied to the sweet melodies of the past, but including electronics. thus was born the concept of a mix of extended playing, but, above all, at that time the DJ turns finally to pure selector (a human juke-box, as it was called then) to an artist who uses the turntables and the mixer as if they were authentic musical instruments, capable of solos and melodic digressions. 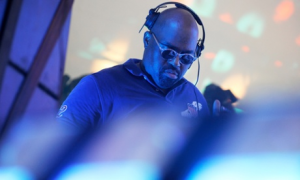 He proposes a hypnotic dj-set, repeated, full of soul that goes with ease from the ancestral sounds of Africa, to the Delta blues. He transforms every possible sound source that enters its mixer.
During one of the Warehouse’s parties the speaker calls this music “House Music”, as contraction of the name of the club.
At that time officially began the musical revolution that would change the world.
Years earlier when Knuckles was working at the Gallery another revolution already happened.
along with Larry Levan and Nicky Siano they introduce a new technique for playing records: the “mixing”. The pieces are joined together, thanks to the same number of bpm, and the music flows seamlessly. At the Gallery they also had a console equipped with three dishes: the third was used to insert effects and sound during the mixing of the two tracks. 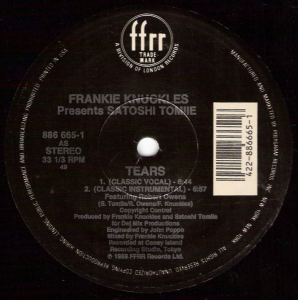 Personally I think the piece that distinguishes Knuckles still is “Tears”, produced with Robert Owens (who was already part of Fingers Inc. along with another long-time producer Larry Heard – Mr. Fingers) and Satoshi Tomiie, with whom he had close ties lasted many years, to which were added many other names such as David Morales, Eric Kupper, John Poppo, Roger Sanchez. Out in 1989, a period in which the various strands of House Music start to separate outlining the many styles that still inspire: Deep House, Techno, Acid, Garage. “Tears” is characterized by its deep sound and a voice that along with the rhythm make this piece extremely snug. The reception of the song was instantaneous on both sides of the Atlantic.
With his friends from New York, David Morales, Satoshi Tomiie and Bobby D’Ambrosio in 1989, he founded also the Def Mix Productions, whose work continues today.

Beside his first album in 1991, “Beyond the mix”, I remember the countless collaborations and Remix for singers such as Michael Jackson and Diana Ross, for which he won a Grammy in 1997.
From his first LP were extract the hit “The Whistle Song” (probably the best known song by Frankie Knuckles), “Rainfalls” and “Workout”, which not only reached good positions in the dance charts but they were also very well received by critics. Between employees of the album still find some of the best known names in the world of musical productions of House Music: John Poppo, Eric Kupper, Paul Shapiro, Satoshi Tomiie. 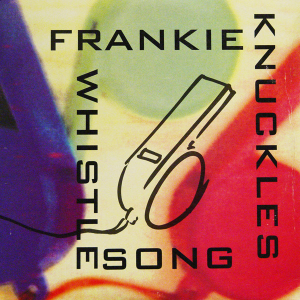 In 2011 began an association with the English label “Nocturnal Groove”, which proposes a modern twist some of the great classics of the past, under the name of “Director’s Cut”. The project also collaborates Eric Kupper,
the famous sound engineer.
Frankie Knuckles, who was born in the Bronx in 1955 with the name Francis Nicholls, had begun to exercise his technique at the famous Continental Baths in New York along with other promising as Bette Midler and Barry Manilow, and avant-garde DJs as his friend and mentor Larry Levan.

“The Godfather of House Music” died at only 59 years due to complications from diabetes, a disease from which he suffered for a long time, in the night between March 31 and April 1, 2014, leaving a void, that those who have enjoyed his music style, consider unbridgeable.
GoodBye Frankie!